Vasiliy Perepelica,
the first head director deputy of Foxtrot group of companies in charge of development and investment

Vasily A. Perepelitsa came to GCF from the banking sector. He has 18 years of experience at the top positions in banks, in commercial, industrial and service companies. Yt is good experienced in the project management, fundraising for the implementation of trade and investment programs.

He managed the specialists of the Financial and Economy Department who reduced the interest expense charged on loans to businesses of the Group. They also have diversified relations with creditors; and have attracted foreign experts in this area ("Euronics") to increase sales per "Foxtrot. Home Appliances" square meter. 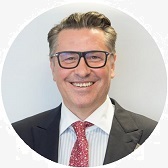 The Financial and Economic Department of the GKF, under the Vasily Perepelitsa management initiated the organization of cost management businesses assets, denoting the role of the GKF as a portfolio investor. And in 2013, he has established a system of consumer loans in the network, the program "Financial Supermarket", the one of a kind in retail market of Ukraine./p>

Period from 2005 to 2011 is connecting Alexey Zozulia with the Foxtrot group of companies. He built his career from the post of the head of regional retail trading service to the post of the operation director. From 2010 to 2011 he directed the project “Depot Development Group” – the one of Foxtrot group companies develops as the real estate management.

Then was a period from 2011 to 2013 when Alexey Zozulia worked with others retailers. He headed the “Farmastor” company, which include pharmacy network “Good day drugstore” and “The Family drugstore”. From 2013 to 2018 he was the operation director in the EVA number of shops. 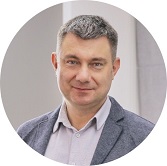 Alexey Zozulia came back in Foxtrot on the post of trading management director in March 2019.

Alexey’s Zozulia mission is to save lead position of the brand, to provide quality and quantitative business growth rate in both direction (online and offline). He will continue internal reforms which have already started to keep the main retailer competitive advantage – confidence and loyalty of customers to Foxtrot.

Andrey Ostroglyad has over 10 years of managerial experience in retail projects. He worked his way from the seller to the chief operating officer in the company "Foxtrot. Home Appliances".

Works in the group of companies "Foxtrot" since 2004, in the course of business, his progress has been repeatedly noted. Andrey was voted the best shop manager, regional retail network and the region as a whole. On own experience knows that hard work and dedication necessarily lead to success. 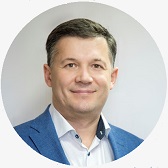 Believes that, to reach the goal, and therefore success, you need to think strategically, a lot of work on yourself, and learn to care about learning and personal growth of the team. Has the skill of building teamwork, managing business processes, crisis management.

In 2013, was awarded the Gratitude of the Prime Minister of Ukraine "for the many years of hard work, a significant contribution to the reform of domestic trade, the development of entrepreneurship and creation of market infrastructure in Ukraine."

Andrey Ostroglyad - a supporter of an active healthy lifestyle, it takes an active patriotic stance, and has two sons.

Since 2003 Vladimir Nikitenko as senior manager specialized in the leasing of retail space, launching and managing shopping centers, audit and real estate development in Ukraine.

He headed the processes associated with finding tenants and signing leases in Kiev and regions, coordinated team of brokers working on projects. Among the gained experience - skills to represent the interests of owners of real estate participate in the process of advising clients in the development of the concepts of shopping centers, business plans, zoning of commercial space, as well as in the development of the basic conditions of the lease. 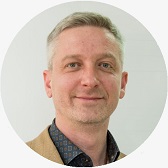 The main activity of Vladimir Nikitenko in the status of the commercial director of DDG - the achievement of a mutually beneficial commercial terms of lease transactions with international and national operators of the retail market; involvement in the regions of anchor tenants for the development of civilized trade formats. Also, another project headed by Vladimir, is the development of children's entertainment center, Fantasy Town. During the work of Vladimir Nikitenko as commercial director of DDG following results were achieved:/p>